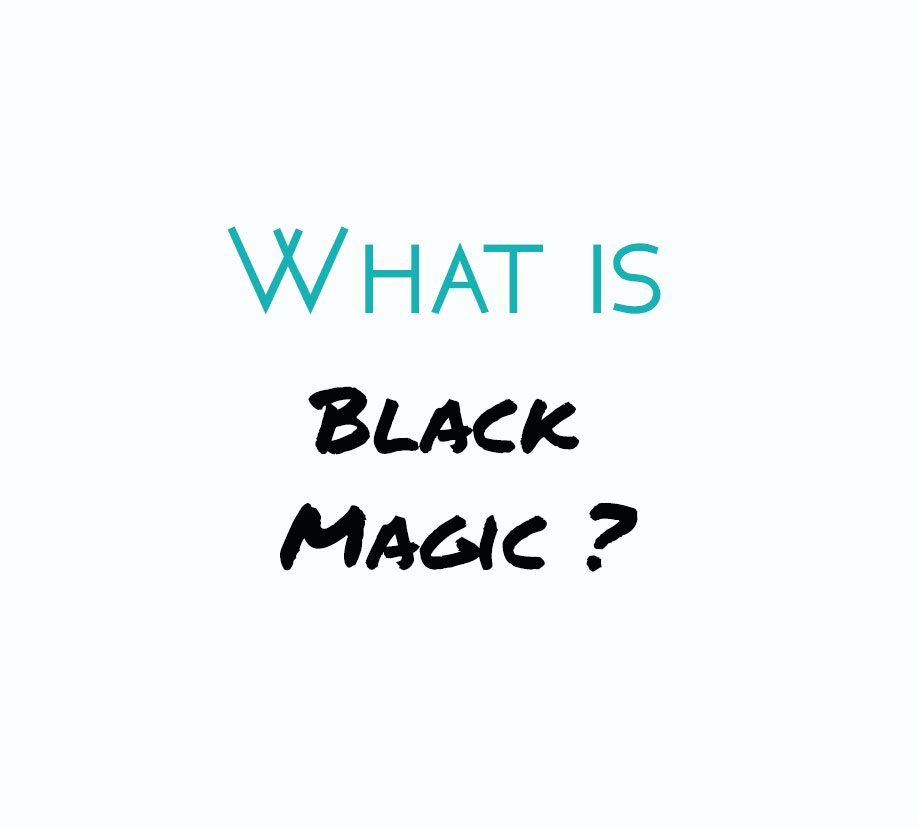 Hi Gigi I have a question about Black magic, or energy in general. (I’m not planning on using it but i am just curious about using energy with intention for self empowerment for my own growth…) I’d like to understand what it really is, and is it different from positive energy or is it just using energy with negative intentions? Or is there a negative force behind it as an entity? Can you please explain the real danger of black magic and why many say not to mess with it. I have heard people say “don’t mess with it its dangerous but id like to know the reasons why. Thank you (:

We can absolutely talk about black magic, what it is and why it is advised to not mess with it. I welcome this question because it would perhaps be uneven to never explore the ‘underbelly’ of esoterica. In fact, I believe that every truly good witch has a knowing of this balance deep within their heart. There is a superstitious energy around it where we feel afraid to even talk about it. Unfortunately this only adds power to it, black magic depends on fear and ignorance to exist, inside the practitioner and in the world at large. I know people who are in this field who refuse to talk about it. The more we bring light to all elements esoterica, the more empowered we become. There are no taboo’s here.

No direct creation with black magic

Straight off the bat, the best reason to not mess with it is: why bother? Black magic is not ‘magic’ at all, there is no direct creation with black magic. The term ‘magic’ in itself is simply manifestation, conscious manifestation. In order to consciously manifest and create you have to acknowledge and honour love which is the basis of creation and the dominant force.

Many people who do not feel they can take responsibility for the problems in their lives turn to this area of spirituality to get a sense of control. They may have suffered trauma, bullying, or other dis-empowering things that makes them crave a sense of power. In a way, it is all an elaborate act of facing ones demons – literally. Whatever beings do come forward will be embodiments of the pain one is carrying. Whatever harm one tries to do to other they will receive back to them via the universal law of attraction (more on this later).

Black magic involves connecting with lower astral entities, summoning them and entraining ones self to agendas that are destructive and chaotic. These rituals mimic and distort divine energy hoping to feed off of the confusion and pain of others. One may receive small bursts of power or feelings of influence via these entities but because it is not actually creating anything they are short lived and empty compared to being connected to the infinite level of energy from your soul.  It taps into the lowest part of humanity and because it is by nature a co-dependant system there are great karmic consequences.

Any manifestation via this practice depends on the ignorance of others, it lives in the dark folds of immaturity, fear and pain where people refuse to look.  True manifestation, magic and creation comes from owning your mistakes, forgiveness and love. The ‘magic’ is that we have access to our personal power and therefore our hidden intuitive capacities and wisdom. This unfoldment of our true nature may feel like magic, but it is really just part of self realization. Conversely, black magic itself as a practice can only thrive in this world if people are ignorant to their own light. The more people wake-up the less these type of practices can actually exist.

Dancing with your demons, not ‘demons’.

Esoterically black magic is the entrainment of your existence with your demons, you begin worshipping your lower-self which creates chaos and hedonism. And when I say hedonism, I don’t mean the empowering kind, where you spend a weekend eating too much pizza and not answering the phone, I mean the kind where you are too terrified to connect with your heart, so you become an energy vampire and concerned more about your self than anything or anyone. That kind.

Shame and powerlessness, then engine of the dark arts.

It is understandable that this may be appealing to people who have experienced paralyzing shame and invalidation in their lives. If they are interested in esoterica they may turn to these practices in an attempt to gain control of these emotions. They may feel so cut off from their own light that this is the best way to feel some level of power and control. White magic, or simply manifestation, is divine collaboration with your higher-self where as black magic is collaboration with you your negative ego. To someone who is feeling left out, disconnected, and shameful about who they are, celebrating what they, or society, feels is bad, can actually feel freeing. Many people who turn to this practice do so because they feel as though society has suppressed them in some way.

Distorted, malevolent energy associated with the lower astral is based in trickery, they sense that they are lacking power so they understand they must create an impression of power. This is why they often try to be intimidating and shocking in their appearance, if they can’t jar you out of your centre in the first few seconds, they got nothing. And, as nature reflects when light is introduced these beings fade away.

Another reason why people advise staying away from it is that it can become psychologically damaging. This is a practice that depends on you directly connecting with your demons, not to heal yourself or improve, but to gain control and power. In this way you actually do connect with lower astral beings, by nature the entities are selfish, tricksters that are not interested in genuinely helping you. They are only interested in giving you the bare minimum so that they can vampirically feed off of you. Remember, this is the opposite of light, there is no real enrichment. The farther you go, the more unstable you become. As beings of light by nature we are not designed to endure long periods of time in distortions; we are here to transcend.

To your question as to whether there is an entity at the top of the totem pole, yes there is, there is a hierarchy to this system.

Black magic exists in a broader sense so there we can existentially summon up our inner demons and experience them. Even curses do not exist how we have been led to believe, no one can curse us or send us destructive energy that absolutely effects us, this is a free will universe. If anyone ever tells you it is possible, take that as a sure sign they have no idea what they are doing. We can only experience a ‘curse’ is we believe we can, and even then the extent of it will still be determined by our beliefs. This is clear when we see that some people have terrible experiences with demons that follow them their whole life causing chaos while others have no encounters what-so-ever. The determining factor here is psychology; it is our belief systems that allow our permeability to the spiritual world. Your consciousness controls your experience, period.

Many people within the new age have re-named and expanded upon black magic; as we progress more clarity about the spiritual realm is given. One such expansion is what we know as the ‘false light’ paradigm. This paradigm manifests in our reality in several different ways. You can google that phrase and get a whole lot of information on the system we call black magic. In fact, it is probably a healthier name for it.

Here are a few tis bits.

1)The false light paradigm is not just words or an idea it is an actual physical place within the 4th dimension that mirrors a basic understanding of divine energy with specific distortions that keep it from actually being divine. These well placed distortions ‘trick’ individuals into funnelling their energy (thoughts, feelings etc) into the false light structure providing food to the beings within it. For example, an individual consciously or unconsciously plugged into this system will give truths but also a bunch of distortions laced in. Their goal will likely be to gain as much power as possible with very little personal responsibility, as personal responsibility is, well, hard.

2) The beings within this structure are vampiric, they would be recognized as people within the narcissistic spectrum in our world. This sick structure needs large numbers of people to be compliant, unaware, and dependant to have a constant supply of energy. They need them to become ignorant to their individuality and light. As long as people are unaware, these hierarchies can steal your life force (light/photons) and remain in a state of rebellion from their own evolution. Heart energy allows one to bypass this structure entirely, and in many ways this weird false light is a catalyst to help us realize how important our hearts are.

3) Black magic/false light symbols illustrate the black magic basis of mimicry as they are distortion of symbols that have already been created and imbued with divine inspiration. We have the Buddhist/Hindu swastika now flipped as the Nazi swastika. WOW! how creative was that?! We have the pentacle, or pentagram, a sign of material abundance, wealth and creation flipped upside down to now represent the a gateway to pain. Amazing! This list goes on. There is no real creation here, only mockery, and hopeful ignorance. True creative abilities and come through a connection with your heart and soul, if that is not there, copying others is the only option. The more humanity wakes up the more these distortions starve and the negative heirachy falls.

What can be confusing is the trickery and manipulation that comes to play. Part of the illusion here is that people connected to this false light will appear to be enlightened. It is only through clear sight and heart connection that the distortions can be sensed. We are now currently in a period of increased focused light and it will become easier to see these darker patterns. I have spoken about this in my exposure videos and in this article on imbalanced teachers.

Sovereignty is the answer to being caught up in the false light, black magic paradigm. People, ET’s and supernatural beings associated with the false light will encourage co-dependancy. In spiritual teachers they will encourage warship, in political leaders they will try to create fascism. They will encourage chaos and division to stop people from realizing they they are creating an environment of co-dependancy and connections to false light. These traits and patterns are all around us, folks. All dark forces need a compliant, unaware victim. Your heart is your sovereign guide here and it will always lead you to your highest available thought and action.

If you wish to engage in black magic, you may do so, however, let it be known that you are diving deep, not into personal power, but into personal demons. You will play with your own fears close up. Nothing new will be created from this because creation does not come from pain, it comes from love.

As I finish this it is important to say that this system serves us, if we were not able to use it as a catalyst for wisdom it would not exist. The type of wisdom it offers is through learning what we are not. It represents where we are weak and need to heal.