Not all things that have faded into our past belong there, sometimes we leave things behind that may validate and inspire us. We have a rich history of psychic culture that rests just behind the collective consciousness. It’s time to pull it into the fore! As of now I am introducing a new series to my blog: Lost and Forgotten! Here we will dive deep into the mists of time and revive a piece of metaphysical history: a book, a psychic technique, a teaching — who knows what will arise! Be sure to subscribe to my newsletter for pertinent updates!

Today, I present to you:

“From India to the Planet Mars” by Théodore Flournoy (1900) 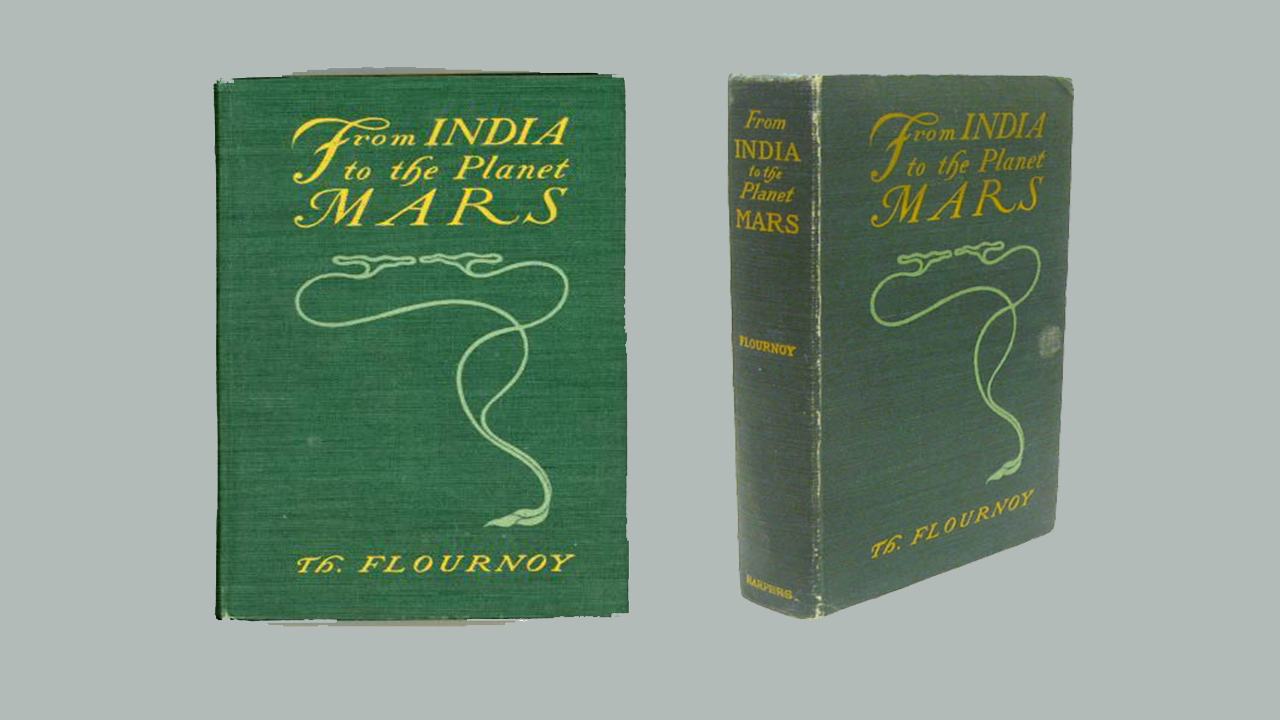 You thought the starseed phenomenon was a new thing? Not quite. Oh, how those strange spinning spheres in the sky fascinate us humans! I have to admit, this is not so much of an obscure book, it was passed through the curious hands of Freud and Jung at the peak of the collective fever dream we call victorian spiritualism. That’s right, while we were capturing spirit photos and making jewelry out of deceased peoples hair, we were also channeling visions from other planets. What a time to be alive!

In this book a young woman, who calls herself “Hélène Smith”, begins a love affair with mediumship and falls into the world of spiritualism. She is one of the many amateur mediums during this time of psychic rebirth in the West. In the first chapter we learn about her life and the mediumistic manifestations she has, such as her spirit guide, Leopold, appearing as a bird to warn her about a bouquet of mint. Or the startling vision of a disembodied red head staring down at her from the rafters. It is truly fascinating how even though these accounts are written 100 years ago the way visions appear is consistent with how psychics  function now.

We are then brought to Hélène’s development as a medium, first without much psychic power, but as time passes she begins to fill parlours. The inquisitive and supportive nature of the sitters, and Théodore, create a beautiful atmosphere to lose oneself in psychic development. Incredibly, Hélène’s psychic development is public, she dives right in and the sitters seem to understand the delicate dynamics of psychic connection. This type of relationship between psychic, client and researcher is an interesting contrast to how these abilities are viewed today. During these sessions we see Théodore truly exploring how spirit moves in the mind. He leads the reader not as a convert, but as a studious psychologist.

Some of the most fascinating musings in this book are the way in which Théodore describes Hélène’s clairvoyance, such as how Hélène see’s a cloaked figure with the number 18 when her employer asks a question about the location a dress pattern. Or, when Hélène sees a frightening lower astral figure followed by a bouquet of flowers and a snake, in a seance. These vivid depictions give us a sense of what it is like to have developed psychic gifts…cryptic and often surprising.

As Hélène progresses in her ability she begins to describe her past lives, hence the title of the book: From India to the Planet Mars. Due to her souls memory, she ends up having an immediate and vivd connection to the planet Mars describing the language, lifestyle and clothing. These are perhaps the most fascinating sessions, by far. It is beautiful how when the mind is relaxed and the psyche trained, we can reach into the depths of the universe!

This one snippet is particularly interesting describing Hélène as conversing in the Martian tongue. Not bad for a Victorian era book!

“Helene arose, left the table, and held a long conversation with an imaginary woman who wished her to enter a cu- rious little car without wheels or horses. She became impatient towards this woman, who, after having at first spoken to her in French, now persisted in speaking in an unintelligible tongue, like Chinese. Leopold revealed to us by the little finger that it was the language of the planet Mars, that this woman is the mother of Alexis Mirbel, reincarnated on that planet, and that Helene herself will speak Martian. Presently Helene begins to recite with increasing volubihty an incomprehensible jargon, the beginning of which is as follows (according to notes taken by M. Lemaitre at the time, as accurately as possible) : “Mitchma mitchmon mimini tchouainem mimatchineg masichinof mezavi patelki abresinad navette naven navette mitchichenid naken chinoutoufiche” . . . From this point the rapidity prevented the recognition of anything else, except such scraps as “teke. . . katechivist. . . meguetch,”. . . or “meketch , , . kete . . . chimeke.” 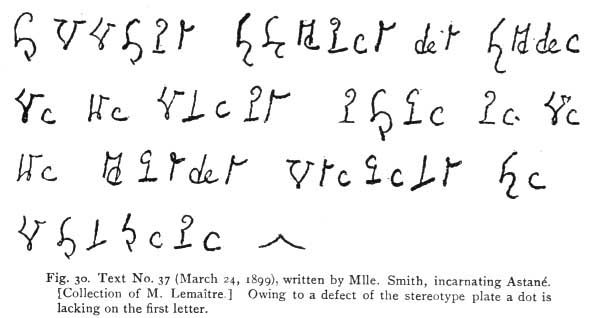 While she is lost on the psychic waves of Martian memories an interesting technique is discovered where Théodore realizes he can place his hand on Hélène’s forehead and say the name “Esenale” to unlock deeper understanding of the Martian language. This is a fascinating detail that illustrates the complexity of the psychic state and the importance of specific resonances being introduced at certain times to unlock precise waves of consciousness.

“For more than two years and a half, the imposition of the hand upon Helene’s forehead and the uttering of the name of Esenale at the proper moment during the trance constitute the ” open sesame ” of the Martian-French dictionary buried in the subliminal strata of Helene’s consciousness. […] In spiritistic terms, it amounts to invoking the disincarnate Esenale, otherwise called Alexis Mirbel, who, having lived on both planets, can easily devote himself to the functions of an interpreter.”

It should also be noted that Hélène is not just babbling out incoherent tones to the casual delight of the sitters, She is clearly speaking and teaching the meanings and pronunciation of a Martian language

“Martian, is always aspirated ; the word ten is pronounced as in the French gluten; essat, like fat ; ames, like aloes ; mis and mess, like lis (flower), and mess (of an officer), etc. In the sec- ond place, for the different values of the e I have adopted the following rule : the e broad is always indicated by the accent grave e; the e medium, which is only found at the beginning and in the middle of a word, is marked with the acute accent e; the e short, by the acute accent at the end of a word (or before a final e mute), and by the circumflex at the beginning or in the middle ; the e mute, or demimute, remains without accent.”

It is not just the Martian language that Hélène remembers, she also randomly experiences deep strange visions of Mars. In todays esoteric language, we would call that a “bleed through.” Bleed throughs happen when an individual’s consciousness synchs up perfectly with another time and place within their souls memory. This usually happens when one is in a very relaxed state and/or there is a trigger in ones environment that stimulates a connection.

“She was on the border of a beautiful blue-pink lake, with a bridge the sides of which were transparent and formed of yellow tubes like the pipes of an organ, of which one end seemed to be plunged into the water. The earth was peach-colored ; some of the trees had trunks widening as they ascended, while those of others were twisted. Later a crowd approached the bridge, in which one woman was especially prominent. The women wore hats which were fiat, like plates. Helene does not know who these people are, but has the feeling of having conversed with them. On the bridge there was a man of dark complexion (Astane), carrying in his hands an instrument somewhat resembling a carriage-lantern in appearance, which, being pressed, emitted flames, and which seemed to be a flying-machine. By means of this instrument the man left the bridge, touched the surface of the water, and returned again to the bridge.”

Hélène’s had such a strong connection to Mars that she took the time to draw these scenes that she would see in her visions. 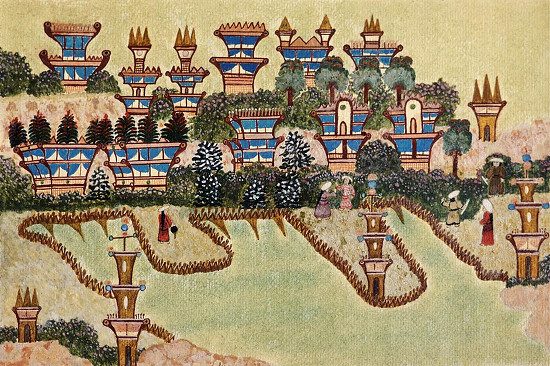 Hello there, sir! That sure is an interesting staff you have in your hand. 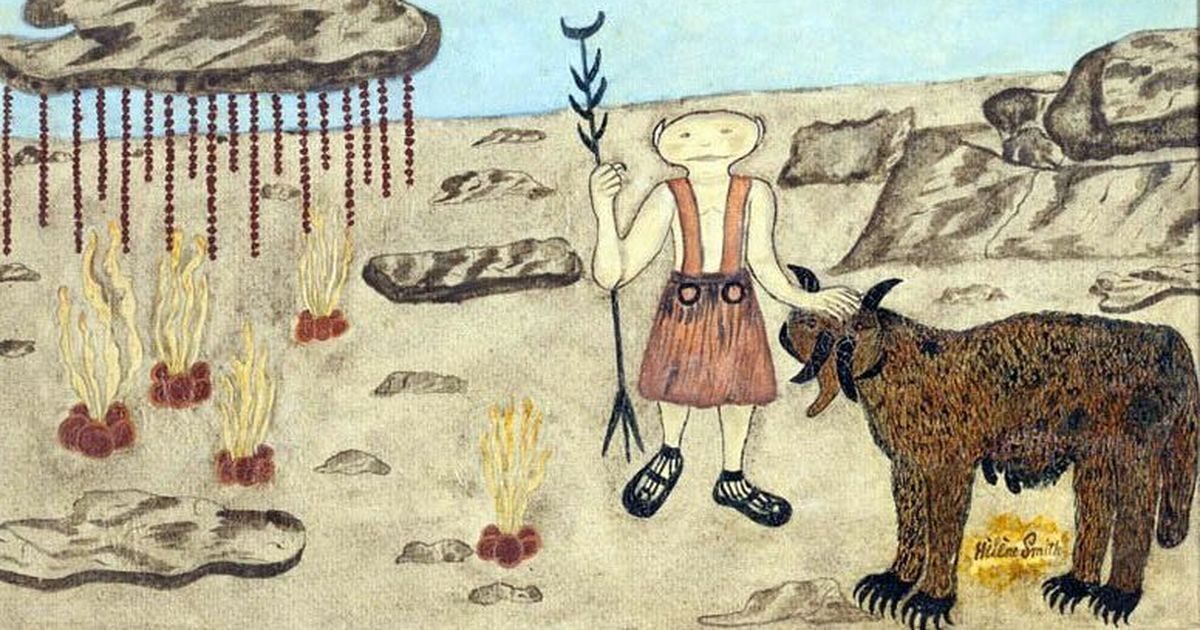 “The afternoon of the following day, at her desk, she found herself enveloped in a red light, and at the same time felt an indefinable but violent af- fection of the heart (aura of the voyage to Mars). ” The red light continues about me, and I find myself surrounded by extraordinary flowers of the kind which I saw on my bed, but they had no perfume. I will bring you some sketches of them on Sunday.” She sent them to me, in fact, on Monday, with the following note : ‘* I am very well satisfied with my plants. They are the exact reproduction of those which it afforded me so much pleasure to behold.”

There are many more interesting tid-bits about cosmic mediumship to be found in “From India to the Planet Mars” by Théodore Flournoy. I will stop my review here so you can discover them yourself! It is easy to forget how developed mediums were one hundred years ago, but when we take the time to look at some of the forgotten literature, we realize that this love of psychic exploration is very much alive — even the cosmic variety.

Other explorations of Hélène’s work:

You have already reported this .
Clear Clear All
X