The Lion Goddess is a deep esoteric symbol of the divine feminine. We can see her effigy in stone reliefs, coins, books, movies…and ritual performances.   We can also see her likeness being summoned in modern times by Katy Perry in 2015 at the super bowl halftime show taking on the exact position of the Babylonian expression of the lion goddess, Ishtar. For a deep analysis of this performance and examples of the the lion goddess through time check out my recent video.The clear connection of this performance to a Babylonian Goddess leaves us with many questions: Why would this be done? What does it mean? So, let’s dive in even deeper to the lion, the goddess and ritual performance. 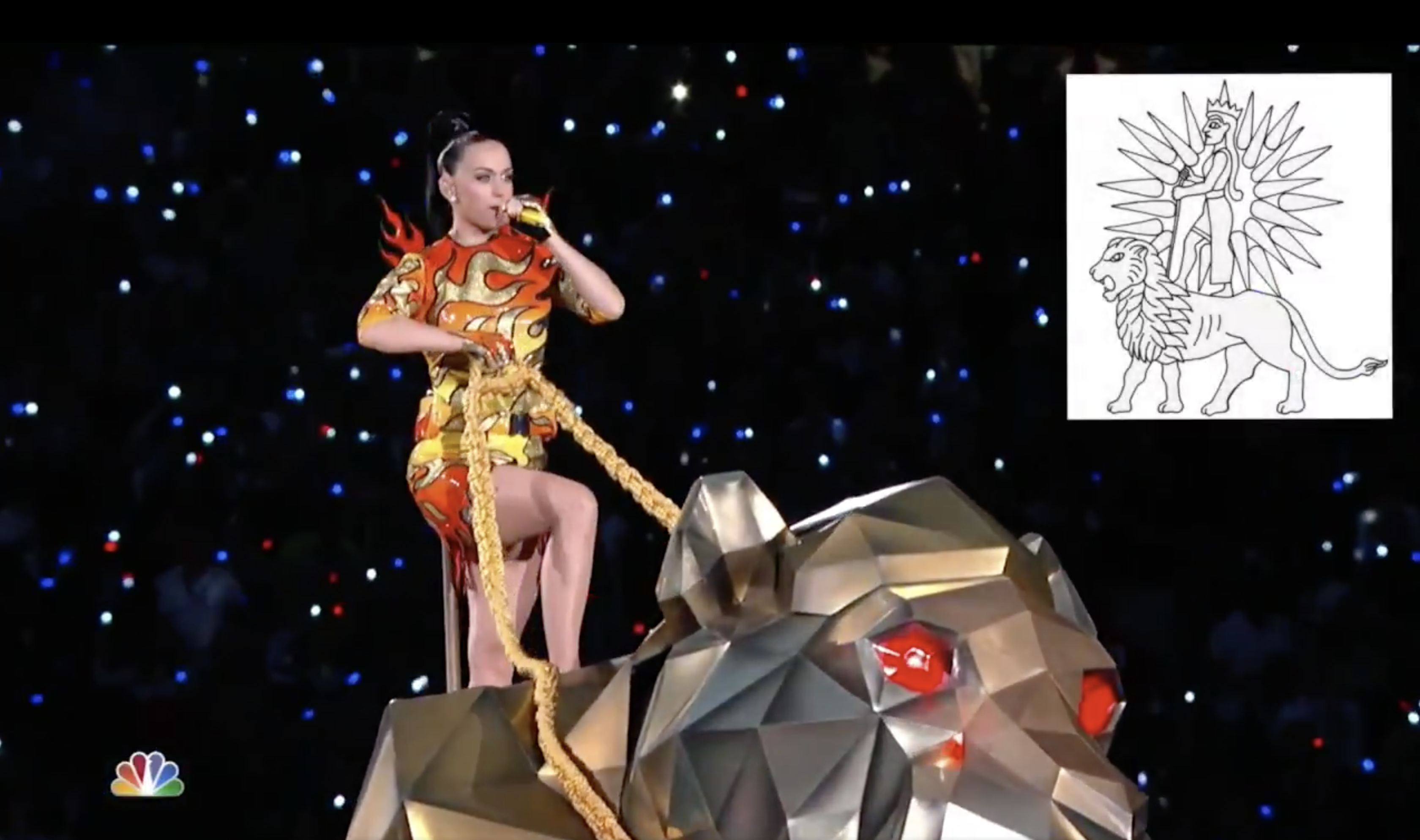 What is the significance of the lion goddess?

The feminine has a specific initiation journey of empowerment and remembrance. These rites include the concept of psychically journeying to other worlds, overcoming fear and temptation, as well as bringing the essence of justice, spirit and compassion to battles and arguments.   These dynamics are explored in coming of age, ritual style stories. For example, the feminine is often challenged to bring a higher intuitive based wisdom to earthly battles and arguments. This dynamic can be seen in Alice in Wonderland, The wizard of Oz, and The Chronicles of Narnia, all of which we will touch on today. In these coming of age tales the heroine embodies the great mother as she reminds us that we are all connected and that problems can be solved by referring to the wisdom of our higher-self. Our heroine also must also face her own shadow, her own potential for evil, This element journey into of self awareness if often appears in fairy tales as the dark feminine taking on the role of a dark step mother, dark queen or dark witch. The heroine must choose to who she will become by being exposed to both light and shadow aspects of herself. On the spiritual level, as a priestess coming of age, she must learn to master her innate psychic power and traverse the confusing and often bizarre levels of the astral plane, this theme is clear in the three examples given above as Alice in Wonderland, The Wizard of Oz and The Chronicles of Narnia all involve journeying in fantastical, psychedelic worlds. 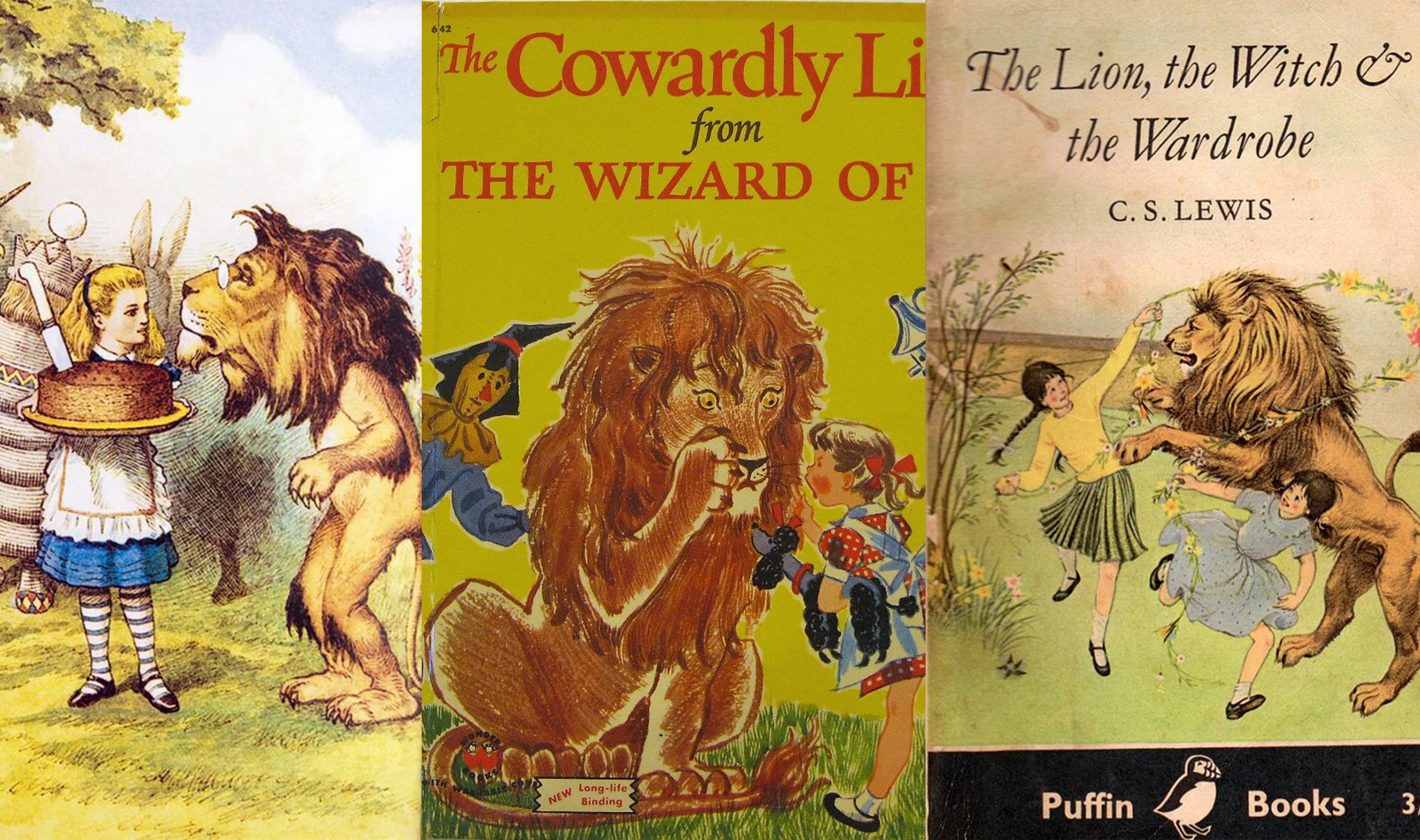 Lions are  often a feature in this feminine coming of age literature and they appear in each story I mention above. Of course, this is an extension of the ancient lion goddess imagery of our ancestors. Fairy tales and stories are our modern way of continuing the coming of age journey of the feminine consciousness.   For example, the lion and the goddess appear in C.S Lewis’ The Chronicles of Narnia series. The young goddess figure in this series is even depicted as having the traditional bow and arrow of Ishtar and even rides on a lions back.

The cowardly lion is the confidant of Dorothy Gale in the Wizard of Oz. She helps him remember who she is, bringing him back to his heart. She even leads the people of Oz to a more just and fair existence by exposing the wicked witch and wizard.    In the Alice and wonderland series we see the Lion and the Unicorn. Alice’s challenge is to mitigate and bring harmony to the disagreement.   In the pre Disney 1916 film adaptation of Snow White a lion is seen peering through the bushes at her.   You can be sure, where there is a goddess coming of age story, the lion is not far away.

Why use this imagery in rituals?

Esoteric rituals consist of basic archetypes, stories and myths.   Many people believe that occult rituals are obscure, mysterious and based in some kind of symbolic language that the lay person does not have access to and cannot understand. This is not true. Rituals use myths, ancient history and archetypes that anyone can learn to recognize and understand.   In fact, this is the purpose of public performance ritual, to stimulate and grab the person watching with symbols that are already alive and working deep in their subconscious mind.   The simple truth is that rituals would not work if the symbols were unrecognizable and meant nothing to humanity. The whole point is to use the known language of the subconscious/spiritual mind.

Rituals influence us by manipulating these symbols and archetypes that are already alive within our mind and meaningful to our spirit. These symbols can create certain effects in our subconscious mind and spirit without us being aware of it.   This is done through blending, or associating, these symbols we already have a relationship with with other energies that they want us to digest and take on. Ritual work is like a recipe, blending archetypes with intentions and spiritual energies to create an effect. It is a way we unify all elements of our being, mind, body and spirit.

What about dark rituals?

In the case of a negative ritual, think of it like taking a spoon full of sugar with a very bitter medicine. We end up taking on something we don’t want because part of us accepts and recognizes the packing. The negative, manipulative energy starts to interact with our subconscious and higher mind along with the symbol that was used, as there is now an association. Over time, if we are not careful, we can be indoctrinated into accepting darker thought forms and ways of being. This is why spiritual, esoteric education is so important, it allows us to remain sovereign beings with control over our body, mind and spirit.

While discussing this is it important to provide the full story of how symbols work in rituals. Too many occult researchers have an uneven, alarmist and dramatic approach to esoterica, rarely providing the positive, or true origin of the rituals they criticize. This does more harm than good as it traps their readers in the illusion that all rituals or symbols outside a certain religious, or other established spiritual norm, are evil. Ironically, this alarmist way of analyzing something for potential occult symbols has the same effect on ones consciousness as actually engaging in a dark ritual. Why? Because only the negative is focused on, there is no holistic analysis and thus, they are not allowing their readers to have the tools to analyze themselves. They are woefully immersed in only the most fearful, dark potential of what they are seeing. This is disempowering and crushing to the novice as the very basis of all occult analysis is the understanding that all black magick, or negative, manipulative rituals are a distortion of a neutral, or positive ritual. This means that there is no unique, or particular language of the dark occult, the dark occult is an inversion of what is holy.

Traditionally, mystery schools existed just as our public schools or universities. These institutions included many important ancient techniques that allowed the precise development of the spirit through ritual. These mystery schools would often use ritual performances to awaken their students and entrain their minds back into their spirit. This would take place in the form of mystery plays, rituals, or even masquerade type parties where various characters were played and acted out throughout the evening. This is the basis of all performance including television, concerts and movies. Clearly, our modern day incarnations of entertainment have drifted far from their mystery school origins.

These performance style rituals were a necessary and helpful tradition to break us out of the forgetful sate of ignorance we embody when we incarnate here. By cathartically playing out ancient symbolic actions we would re-wire our minds back into our higher consciousness and connect with the akashic records. The body must move as the spirit, and the mind must be brought to a higher place through ritual remembrance practices. These movements exist today and are held sacred within certain groups who carry on the tradition.

As we sunk deep into a dark age, this high culture subsided and darker powers began to gain influence. These powers could think of nothing but their own survival and greedily amassing power and influence. Overtime, these people began to realize that the traditional mystery school rituals that had the power to connect and heal could also be used to disconnect people from their spirit and bind them to themselves. They would become overlords and the public bound to them through manipulating the subconscious mind through ritual. In other words, people who had access to ancient mystery knowledge began to use it to exploit the public and parasitically live off of them.

We are now in a phase of development in society where we must return to the memory of our ancient spiritual power. The power that we have left behind and that moves only in the faint memories of the painted halls of mystery temples. We must remember the true form of ritual and symbology, which is to bring us closer to our higher-selves and each other. By remembering we not only render the negative expression of ritual useless, and inert, but harmonize with the true expression of the sacred symbols around us.

Stay tuned for more episodes of In Plain Sight to learn more about how to spot the Occult taking place right in from of our eyes!

You have already reported this .
Clear Clear All
X