I don’t talk about it much, but I spent my late teens and twenties working in the fashion industry as a model. I wasn’t a supermodel by any means, I probably started too late to realize that potential, but I was a solid working model and did well for myself. I have avoided the topic in my work now because I wanted to find my voice (and self) beyond the industry, I didn’t want to lean on it in any way. Now that time has passed I think that it may be neat to speak about my experiences a bit more, if people are interested, as it was such a formative experience for me. What I learned about self worth, business, work ethic, beauty, rejection, discipline and most of all, that place within that flickers unconditional love and wisdom to you no matter what, even when you have been stripped down to the marrow in your bones.

For the first good 7 months of my career I slept on a sad little twin air mattress on the floor of my agency’s model apartment. Most days it would be pretty deflated when I woke up and by nightfall I had to blow it up and begin again. Until you prove yourself as a viable working model, the agency will not invest in your comfort. It was also not uncommon for there to be mice or perhaps even rats (I’m going to just say mice because I don’t want to breathe life into the latter) scurrying, and squealing, across the floor at night. The other girls who lived there had bedrooms, all be it separated by a divider, but at least they had rooms. Ahh, yes, it was the best of times, it was the worst of times. 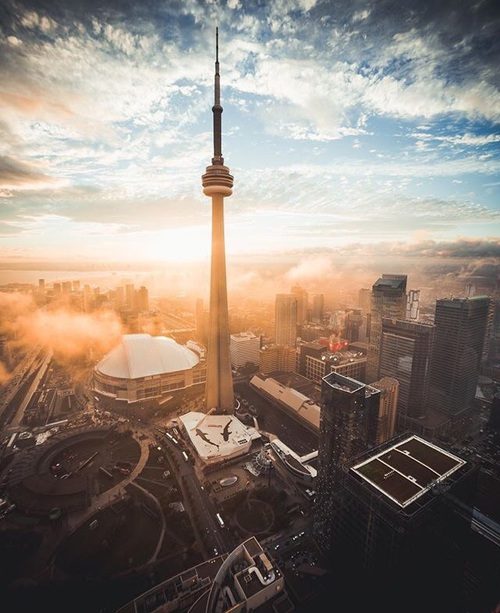 We all lived in a rather large top floor loft in old coffin factory in downtown Toronto, yes, a coffin factory. The elevator was a really bizarre shape, and I didn’t find out until later that it was due to all the coffins. This would have been in the 1800’s when coffins were transported by horse and carriage, which is why it was so odd. This always gave the building a macabre undertone and the fact that it was barely updated certainly didn’t help. In the winter we had to huddle around the oven for heat because the radiators kept breaking and the landlord was so slow to fix them. Thank god we were all so giddy about being on our own and the glamour of the industry because our standards were pretty low.

This is an actual photo of the building off Tecumseth and Niagara: The Historic National Casket Company (Coffin Factory) Buildings. The moment I saw it again I was immediately taken back to the quiet evenings when I would climb onto the fire escape, missing my mountains, and watching the “Tip Top Tailors” sign haphazardly blink itself through the night to the endless calling of car horns from the streets below. It took a long time for me to relax into living in a big brick and steel city. 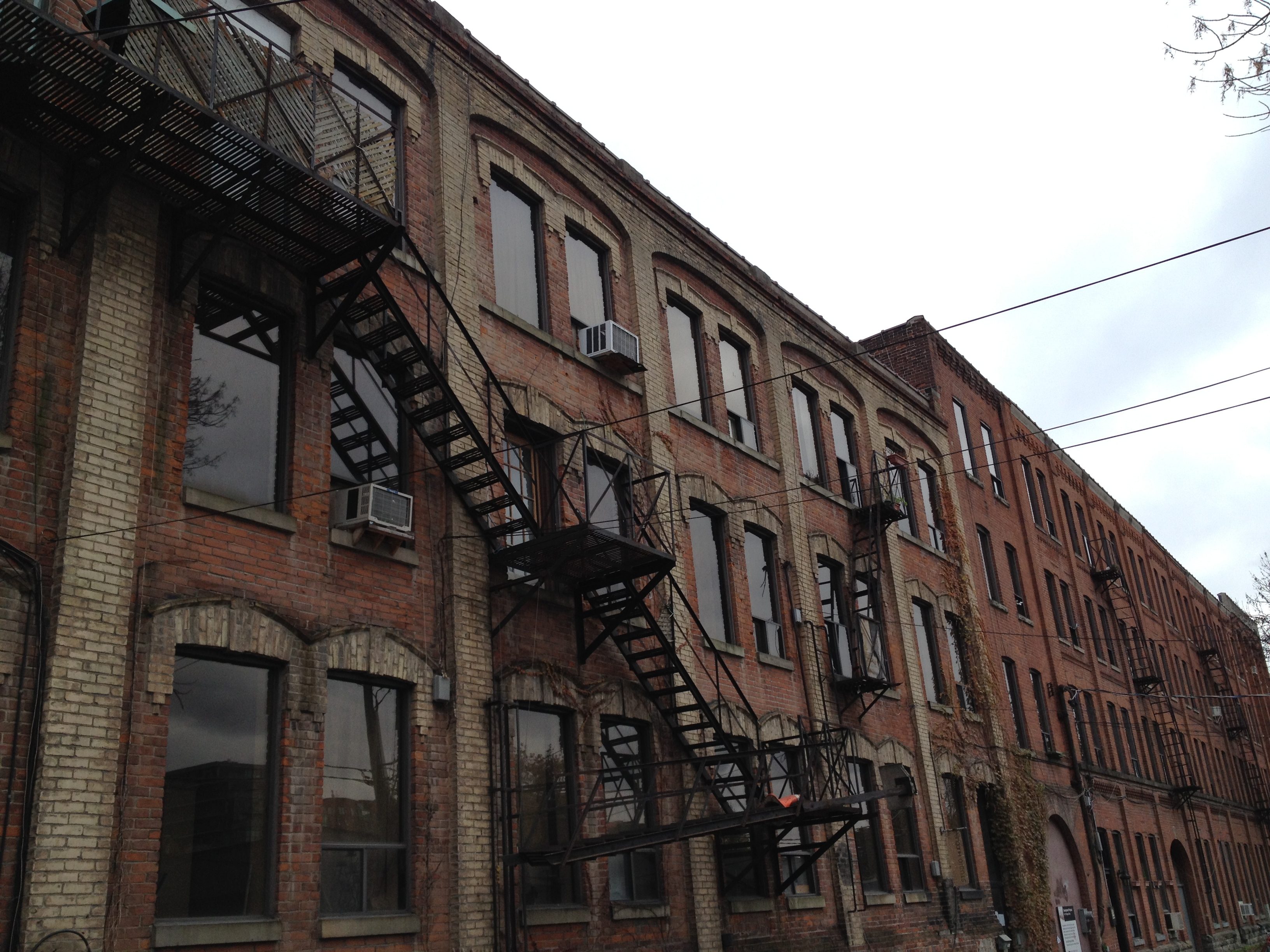 I was only there for a few nights when I started to get dreams about this very rough looking bald man with tattoos all over his body. I got the impression that he was very dark and angry. In the dream he was trying to talk to me about something, but I couldn’t make out what it was he was saying, it was as though his own emotional turmoil was making it impossible to get words out. I didn’t know any of the girls very well, and we were all in competition, so I kept it to my self.

After a while the environment with the other girls softened and we became quite close. We realized that we were different ‘types’ and not really in competition at all.  I shared my experience about the dream, and to my surprise, my flatmates had had similar dreams as well, and as it turns out they had been having them even before I moved in. To make matters worse, just as we sat in mutual silent mouth gaping realization, a bottle of hairspray flew off the shelf in the bathroom at the back of the apartment. Needless to say we all, grabbed our pillows and slept in the same bed that night (and several nights there after).

Once we had openly acknowledged the man with the tattoos things got worse. We would hear foot steps in the outside hallway apparently walk through the door and continue through our apartment. Things would fall off shelves, go missing, we would hear diembodied voices and there was a thick layer of energy that seemed to line the entire apartment some how blocking the feeling and light of the sun. At the peak of craziness the TV turned on by itself to loud scribbly static in the dead of night. To make it even more creepy it was one of those old huge tv’s in the wood boxes that make that zap noise when they turn on and off.

I have to admit that our apartment was not a nunnery, there were many a parties and unfortunately, it was not uncommon for me to rinse, literally rinse, with water, cocaine off of my portfolio before going to go see’s (auditions) in the morning. To be clear, I have never used coke because drugs have always felt like hiding or a mask to me. I had also seen a lot of tragic things happen to people I cared about which deeply solidified my opinion of substances. I believe that because there was so much partying it magnified the haunting.

One night at one of our parties we were all hanging out in a circle and a girl spoke out and said “I don’t know how you guys live here.” Taken aback we asked why she would say that. She continued to say that her ex boyfriend had been a tenant a few years earlier in loft on the second floor. She said the the landlord was “a real angry jerk covered in weird tats” and would never maintain the building which frustrated her boyfriend immensely. He had been trying to get him to change an industrial light bulb that had burnt out months ago in the corridor of the building. He could barely make his way home at night on the crooked floors and had tripped several times. Finally, after leaving several polite notes he banged on the guys door only to be drowned out by loud angsty music.

He came back the next morning and all the lights were still on and the music was still blasting away any chance of being heard in the hallway. He found it a little odd, but thought that he had passed out and left everything on. When he returned from work later that evening the police and paramedics were clogging up the hallway. He asked them what was going on and it turns out that the landlord had killed himself last night. This was obviously very disturbing for him. He continued to live there for a few more months but he said that a lot of weird things were starting to happen so he moved out. In fact, many tenants moved out after that.

My roommates and I were speechless. We had all seen an angry man with tattoos in our dreams. It all made sense. We realized that the fact that it was a suicide greatly increased the potential of the space being haunted, next to murders, suicides can lead to a great deal of spiritual unrest. Eventually we all moved on to different contracts and left the model apartment. I only had to stay there for one more stint before I was able to get a better place. I came back to visit, or do favours for my agency, and it seemed to hold a different energy depending on who stayed there. I am not sure who lives there now but I wish them luck!

May all the spirits in the Old Coffin Factory find peace. May they see the light.
May the new tenants crawl out onto the fire escape, and watch the Tip Tip Tailors sign blink haphazardly through the night to the endless calling of car horns from the streets below.
May they relax into this city of brick and steel.
May they feel their light.
So it is.